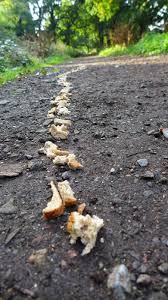 There are trails of breadcrumbs out there, I have found them. At first I didn’t recognize it as a trail,  the place where the trail is laid can sometimes obscure it.  Yet the more I find these trails, and follow them, the more I recognize other trails when I come upon them. At first I thought there was only one or two main trails, now I’m beginning to think they are everywhere.

The well-known fairy tale of Hansel and Gretel used a trail of breadcrumbs to find their way back home and other writers, especially mystery writers, have used the trail with some modifications to tell their story. In ET, Elliott uses a trail of Reese’s Pieces to draw ET out and ultimately bring him home.  Computer programmers use the concept to perform functions within some computer applications. Whether it is breadcrumbs, Reese’s Pieces, or computer code this trail has been a way that has been used for centuries, and perhaps longer, to lead someone where they should go.

For whatever reason, God has chosen to do that with humanity. I have come to believe there are several trails of breadcrumbs that God has laid which ultimately lead to him. By that I don’t mean a kind of pluralism where there are many paths to God, but instead there are different trails of breadcrumbs from off the path that lead to the one path. These trails seem to exist in several different areas and disciplines, but they all seem to lead in one direction

There is a lot of evidence in these broad array of disciplines that lead to one major conclusion, that God not only exists, but that he has revealed himself in Jesus Christ. It is the thing that as I get older and I have come across these various trails that am struck by the similarity in the bread that leads me to recognize it comes from the same loaf, you might say. Various aspects of the physical world, like the fine-tuning of our Universe and even the earth for humanity, genetic structure and coding of the human body, and yet the imperfections through mutation that for me is remarkably explained by the fall of Adam and Eve. The philosophical trail of the Moral argument with Good and Evil and the way humanity seems to be hardwired to recognize both. Even the idea of self-awareness and the desire to explore and find meaning. There are many, many more of these trails of breadcrumbs…more than can be mentioned here but they are there. There have been many books written about some of these trails individually, Lee Strobel by himself in his, “The Case for…” series for example, but no comprehensive look at all the trails that seem to have been discovered.

The existence of the trails themselves intrigues me greatly and the fact that they all do seem to point in the same direction is compelling. For those who are interested I would appreciate any discussion about the trails of breadcrumbs that seem obvious to you and how they would be classified. I want to find all the trails I can….